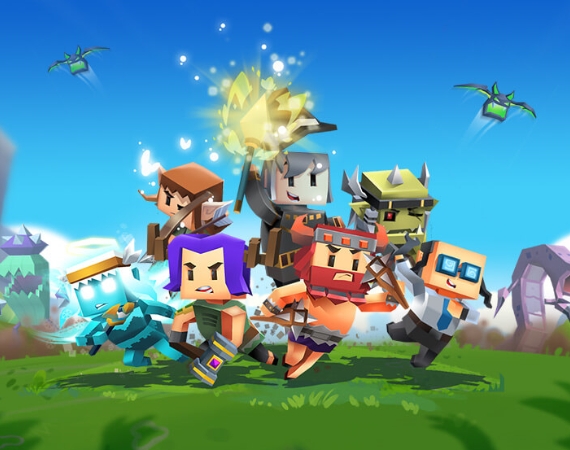 “Hunt Royale”, an innovative mix of battle royale and MOBA, wouldn’t come to life without the vision of its lead developer. For Konrad Średziński it was a passion project, brought to life as a game that he himself would love to play – but couldn’t find. Thanks to the close cooperation with BoomBit he was able to make his dream a reality.

“Konrad is a very independent spirit. Talking about a lot of design ideas and then just doing them. More often than not he will be working very late hours implementing his ideas, but not showing them to anyone until he’s sure they’re polished enough to be displayed. We of course knew that he was working on something and he had our support from the very start. When he finally showed it to us, we were really blown away. And things just kept scaling up from that point”.

This trust that the BoomBit’s team put into the project is something that really helped its creator. He didn’t have to worry about things unrelated to the quality of the product itself.  “I’ve been working with BoomBit for a long time and I didn’t see any other option than working with them again. They are taking care of those parts of the process I don’t really like doing and that’s something I really appreciate”, says Konrad Średziński with a laugh.

That isn’t something that happens at BoomBit by chance. This way of thinking is imprinted into the company’s DNA. As Michał Piwowarczyk explains, “The way we operate in terms of publishing is that we focus on building a good, friendly relationship with the developer and making available all of the necessary resources at any given moment. And because we’re flexible, that means we can easily get someone from the Business Intelligence department to provide an analysis or someone from the User Acquisition department to prepare a UA plan for the game as needed, and so on. They are always available and will help in any way they can”.

All of that was being done without any interference on the game itself. Konrad wanted to make an action-RPG that will bring something new to the market. “There are a lot of mobile Battle Royales, but there is no PvE Battle Royale where players are fighting against monsters for places in the rankings, and not to be competitive in PvP”, he sums up his vision.

BoomBit trusted him on that vision from the very start – even though it wasn’t an obvious market-driven choice. “Mobile market is turning more and more towards hyper-casual games. People are forgetting about the joys of playing a game on a phone for more than 5-6 minutes at a time. We agreed to create a game that will be as addictive as games on PC and console”, says Michał.

What BoomBit brought to the table was its great expertise in the mobile gaming market that helped make this project viable. “We wanted something that is a mobile game first, and at the same time an exciting action-RPG”, adds Michał.

Teaming up for success

The result of that cooperation is “Hunt Royale” – a game that just passed 1M downloads and that is beloved by its large and vibrant community. A great idea, paired by exceptional execution by Konrad Średziński and his team, that managed to achieve commercial success with the help of BoomBit’s team of specialists.

“What is important is that they are not interfering in any way with the game’s development or design side of things. We trust the developer that they know what they are doing and are coming to us with a well-made game. Our job is to make life easier for them by taking away all of the chores of the process. Preparing store metadata, doing UA, QA, providing things like servers, all of that. Publishers often like to dominate over whatever they bring into their portfolio. We aren’t like that, because we don’t believe that it works long term – and we are all about long-term relationships with developers.